At Freie Universität Berlin we have been building autonomous robots since 1998. Over the years, we built several generations of robots which took part in the annual RoboCup (robotic soccer) competitions. Our team, the FU-Fighters, won twice the World Championship in the small-size league (robots up to 18 cm in diameter), and once second place in the middle-size league (autonomous robots up to 50 cm in diameter). We dominated the European competitions over several years, winning five times the European championship.

The project started in 2006, after a three month visit of several of our team members to Stanford University. We worked in the group of Prof. Sebastian Thrun, where we had the rare opportunity of witnessing first hand the development of Stanford’s entry to the DARPA Urban Grand Challenge. The members of the Stanford team were very helpful and gracious in providing us information, technical documents, and all needed help in order to start our own team.

In 2006 we decided to build larger robots, grounding the development in our experience with fast autonomous robots controlled by laptops, and with their own computer vision. We decided to take part in the Urban Grand Challenge – as the name implies, a new robotic challenge for us. Our decision was based also on a consideration of the areas in which autonomous robots could play a role in the not so distant future. By coincidence, the Berlin police department approached us at about the same time, asking us to develop a security robot for large warehouses and enclosed areas (such as abandoned airports). An autonomous car seemed to be the best solution and seed funding from the university was granted for the project. 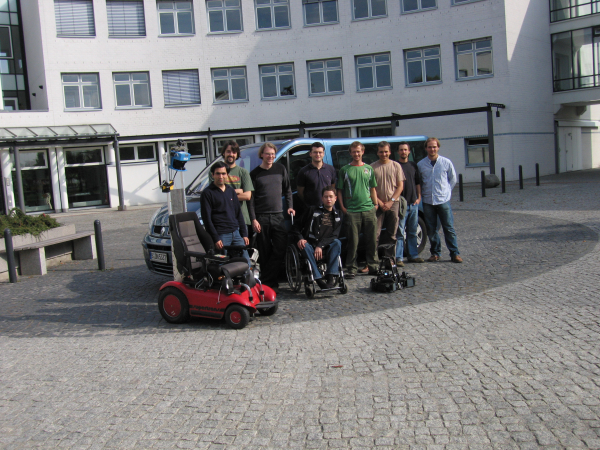 In October of 2006, while still in Palo Alto, we bought a Dodge Caravan which had belonged to a handicapped person in Canada. The car had been modified so that the handicapped person could drive using a linear lever for brake and gas (the lever controls all intermediate steps between full braking and full acceleration), and a small wheel for steering the front wheels. The rest of the car’s components can be controlled through a small contact sensitive panel. We drove the car to EMC in Louisiana where additional electronic was installed, so that the car could be controlled using a computer connected to A/D converters. EMC installed also the interface for the E-Stop-Signal. The car was shipped from Houston to Berlin, where the bulk of the hardware and software development was done, before reshipping the car back to Houston in 2007. 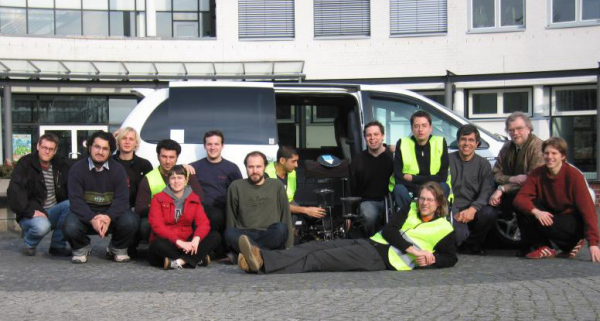 In 2007 the team was a joint team of researchers and students from Freie Universität Berlin, Rice University, and the Fraunhofer Society. The team leaders were Prof. Javier Rojo, faculty member at Rice, and Prof. Raúl Rojas, faculty member at Freie Universität Berlin. The rest of the team was composed of graduate and undergraduate students from FU Berlin, and researchers from the Fraunhofer Society in Sankt Augustin. The team took part in the DARPA Urban Challenge 2007. 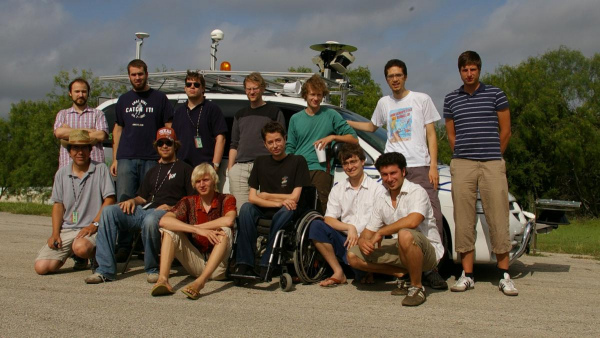 The German Ministry of Education and Research, or “Bundesministerium für Bildung und Forschung”, funds innovative, interdisciplinary projects, with the intention to develop them into successful, market-ready products. The motivation behind this program is to help reduce the time-to-market of the latest scientific advances and establish scientific innovations as the driving force behind the economic stimulation of the German states, known as the “Neue Länder”.

The screening phase took about six months, during which a candidate team develops and proposes a research concept with a specific technology scope. A board of experts then evaluates the proposed concept, and decides whether it is suitable for an actual implementation. In the second phase, the project was realized as an innovation laboratory, called InnoLab, which is supposed to develop the prior approved project within two years. The InnoLab AutoNOMOS was one of the chosen projects for the second phase of the ForMaT Initiative in 2009. 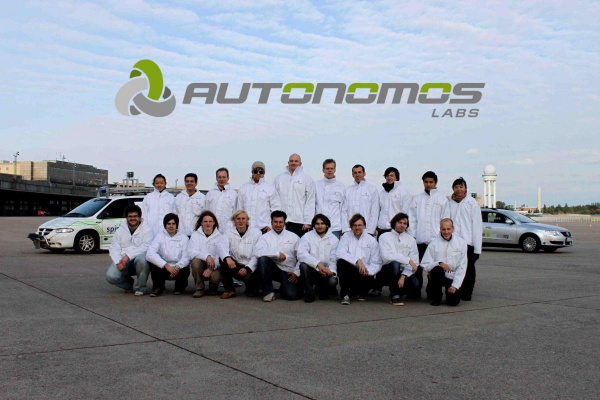